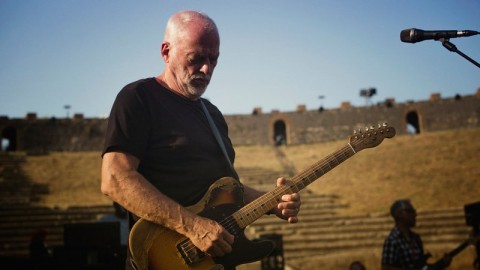 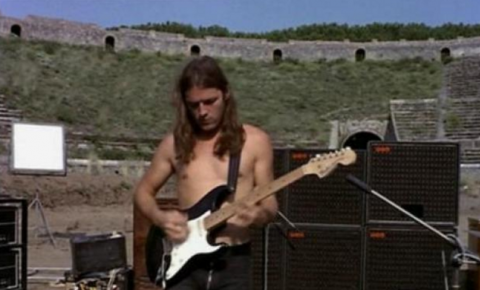 The director Gavin Elder began almost immediately to work on the picture "David Gilmour: Live at Pompeii" after the musician has started talking about a new solo concert on the ruins of an ancient Roman city. The fuss with tons of equipment, the arrangement of lighting, and the first shooting tests — all of this immediately began on the historical area once-burnt by the volcano.

Nowadays Gilmour's shows are something special, in a sense pathetic and intimate, first of all, for the musician himself. That's why his concerts aren’t held very often because they differ from usual gigs by their unique picturesque locations such as ancient castles, coliseum on the Adriatic coast or Vesuvius, which certainly gives all participants of this action a truly unforgettable experience.

"I really like to create something where people have something on top of just the music experience in a room, where they say, 'Ah, that was something special," the guitarist explained to Rolling Stone magazine.

Therefore, Elder, who has previously worked on a similar projects, "David Gilmour: Live in Gdansk" (2006, 2008), as they say, working his guts out to do everything he could at the highest level to move the viewer into the walls of "the city of ghosts".

As for Gilmour himself, the trip to Pompeii also became special for him, because almost 50 years ago, in October 1971, he, being undressed to the waist, played on the same ruins along with Richard Wright, Roger Waters, and Nick Mason from Pink Floyd, the band which he joined several years earlier to replace Syd Barrett. 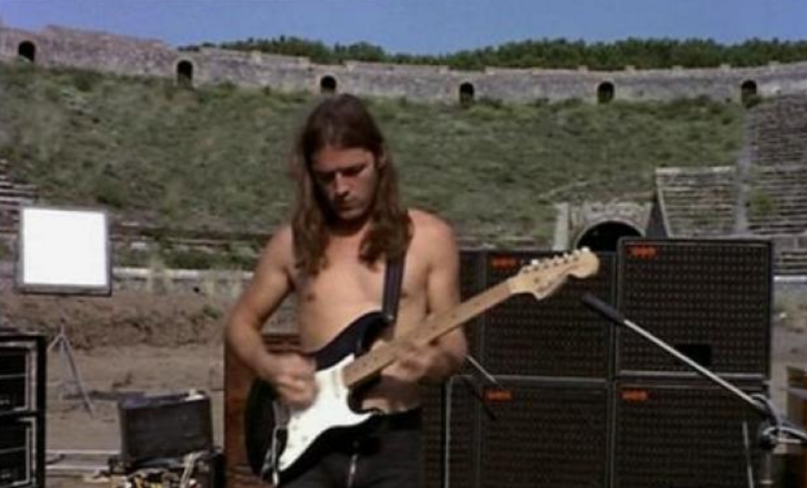 Back then, working under the scorching sun, the director Adrian Maben shot a so-called concert documentary film with a similar title "Pink Floyd: Live at Pompeii". But instead of spectators, the musicians were surrounded only by the bunch of equipment, chaotically scattered remains of the historic city, dust, and dried grass.

"I can't remember how long we were there – it must have been well over a week in the area – but it was really hot," he says, thinking back nearly five decades. "This time, it was really hot again but it was very different overall since we had an audience and were putting on a show."

It’s worth saying that the team has worked hard to make the amphitheater unrecognizable. Despite some problems with the local authorities, which limited the technical capabilities of the crew, everything was ready-to-go. Further, according to the director’s idea, as soon as the outgoing sun disappeared beyond the horizon, Gilmour play the first note. Yes, the same one, by which you immediately recognize the genius’ branded style.

"I was very conscious of what time the show was going to start," Elder says. "I really wanted to capture the magical twilight time, so that you got the sense of where Vesuvius was behind the arena in the distance."

After a short instrumental intro, the amphitheater was rocked by the title hit "Rattle That Lock" from the musician’s latest album, and already from the first song, Gilmour and his band took possession of the audience.

"David Gilmour: Live at Pompeii" is not at all a sequel to the picture about Pink Floyd. This time the spectator sees the same amphitheater, only without foolishness and bare torsos, instead of them — an impressive scene, the admiring crowd of fans, and passionate musicians.

Still, contrary to expectations, with the support of the most talented vocalists, The Rolling Stones’ keyboardist Chuck Leavell, the guitarists Bryan Ferry and Greg Phillinganes, Gilmour performed the best Pink Floyd’s songs, including "High Hopes", "Sorrow", "Comfortably Numb" , "What Do You Want From Me", "Shine On You Crazy Diamond" and others.

The real surprises for the fans were "The Great Gig In The Sky" — the song of the passed away keyboardist Rick Wright, first performed live since 2006, and "One Of These Days" with its thundering bass. Later it became known that the choice to play the hit from the album "Meddle" wasn’t accidental.

According to the musician, on the day of "David Gilmour: Live at Pompeii" premiere, he was very eager to see the result of Gavin Elder's work. After all, before that he had only took a look at some of its video and audio parts.

It’s also worth adding that the concert film has been screened at more than 2,000 cinemas around the world. Among them, thanks to the efforts of KyivMusicFilm, were Ukrainian movie theaters.

If you missed "David Gilmour: Live at Pompeii", there are more opportunities to see it on the big screen in many cinemas from 14-19 September. Visit davidgilmourcinematickets.com for full listings of all future screenings.