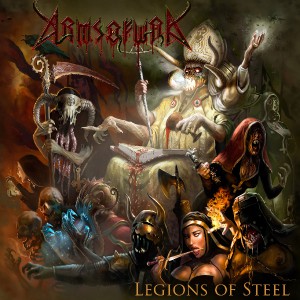 "Perhaps one could chalk up this project, or perhaps Dushan’s involvement in it, to him deciding to get the full extent of his curious fixation with extreme metal out of his system, especially given that this tendency has vanished from the sound of both Magic Kingdom and Iron Mask since 2011. If anything, it shows that sometimes it’s a good idea to go outside of one’s comfort zone, and this whole outfit has managed to put together something solid enough to compete with bigger names that have been at this game a fair bit longer. In truth, this completely blows everything that In Flames has done since 2001 completely out of the water, and also shows a degree of promise that could put this band into similar territory as where The Crown was about 12 years ago. Hopefully this won’t be a brief, one time only project and that more albums lay on the horizon, because it’s tough to justify a name like Arms Of War with just one lone, albeit impressive, cannon of an album."