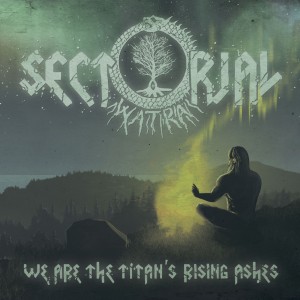 "Sectorial's sophomore album is released by Noizr Productions, which has the ambition of becoming a label for quality Ukrainian releases (for lovers of technical ferocious black metal do check out Nabaath). And yes, Sectorial do bring quality and has a sound of their own with their mix of ethnic instruments and grindcore/death metal (!)"

"For the few who know the debut 'Erase And Reborn The Humanity': the style has not so much changed, but it is less blunt ferocity and some more depth which brings more balance to the band’s music and does more right to the ethnic elements. The thrash/death aspects of the debut (sometimes it felt a bit like Swedish bands like The Haunted and The Crown) are especially to be heard on the first half of the album: from 'The Embers' on it becomes more epic and brings more variety compared to the debut."

"The band has clearly put a lot of work into finding the right studio and the recording process, and that can be heard back. The album (in short 'W.A.T.R.A.') has an honest sound which maintains the dynamics of the songs."