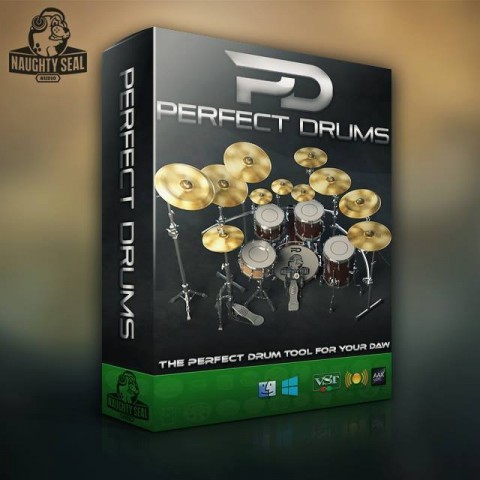 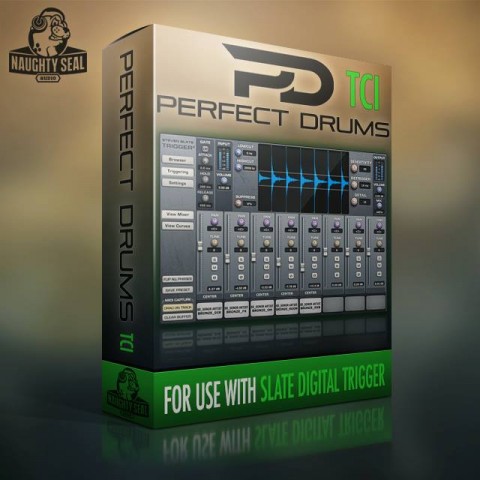 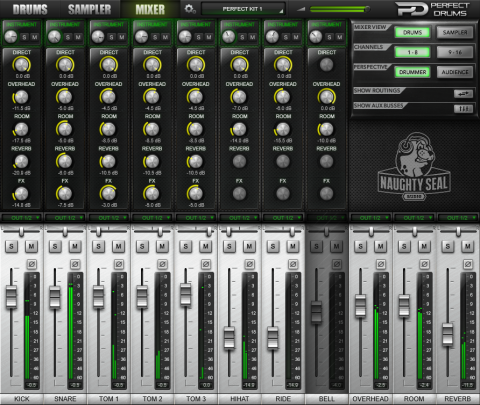 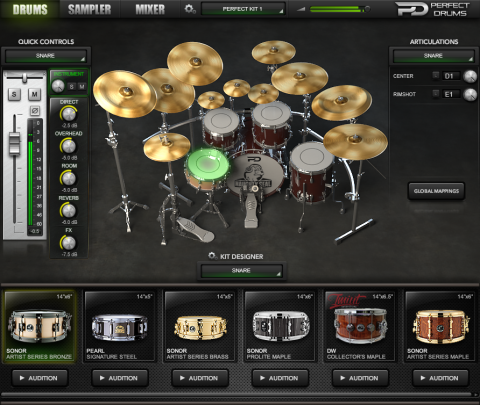 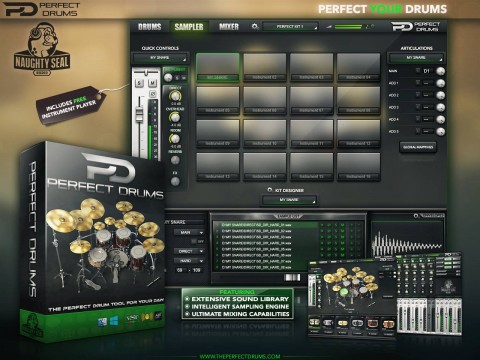 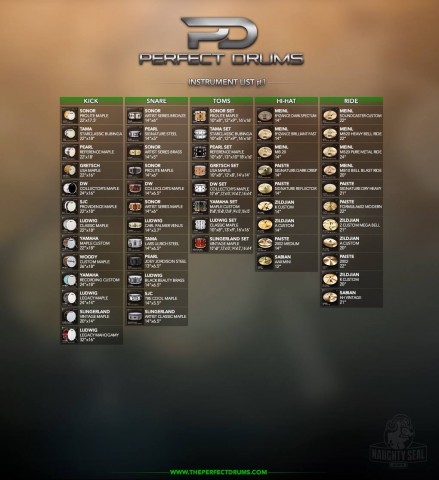 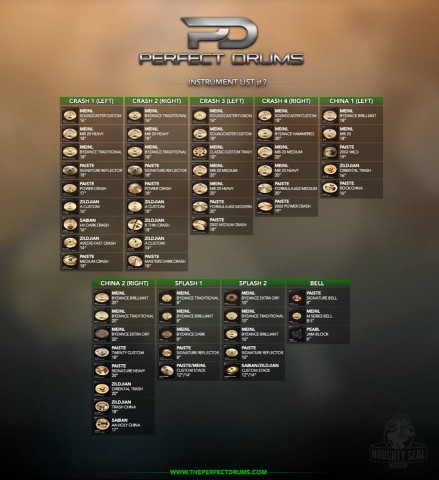 The story behind Perfect Drums creation looks incredibly inspiring. A musician without programming skills decided to create his own audio plugin, which is now used by people from all over the world. Starting your own project is never an easy job, all the more so is to finish and release it successfully. That's why Noizr Zine decided to interview Perfect Drums’ creator Alex (best known as a guitarist of Semargl and a former runner of Blacklight Recording Studio), asking him about how he came up with the idea to release his own product and what challenges he faced with while developing. Also, the musician told us what he thinks about the synthetic drums, what other plugins he uses, and what mistakes should be avoided in music production.

Brief info: Perfect Drums (https://theperfectdrums.com/) is an audio plugin available in VST, AAX, and AU formats (Windows, Mac OS X). It was launched in late 2016 by Naughty Seal Audio. The plugin has an ever-growing library of ready to use sounds (currently numbering more than 130 percussion instruments, recorded in a professional studio), an intelligent sampler (to create your own fully featured multi-sampled drum instruments just in a few mouse clicks), and an advanced mixer (providing full control over all instruments). Also, thanks to the free Perfect Drums Player tool, the users can share their own sound sets with others for free or with a payment.

It's been a little over a year since the release of Perfect Drums. How is everything going on? Do you know in which countries the plugin got the greatest feedback?

Alex: I can gladly say that the start was extremely successful. The product has aroused great interest and is very popular all over the world. It’s also very pleasant to see that there are a lot of famous producers, musicians from top bands and even some of my personal idols among our users. The United States, Great Britain, Sweden, Germany and other countries around the world expectedly take the first places in sales. I must admit, I would like to see more compatriots among users, but considering the situation in the country, this state of affairs is understandable.

Why, being a guitar player, you decided to produce a drum plugin, instead of plugin for guitars?

Alex: Actually, I've always taken an incredible passion and liking to drums. For me, the rhythm section is the basis of everything, this is where I start to set the production and composition in general. When I’m listening to something, first of all, I pay attention to percussion. And I became a guitarist willy-nilly ;) when I was 11 years old I went to the music school for percussion class, but the teacher said that drummers were a dime a dozen, and there were no good guitarists. This is how it all started.

Even a quick overview makes it clear that there are plenty of drum plugins on the market. Why did you decide to create your own product and how does it differ from its analogs?

Alex: First of all, of course, due to the fact that I'm familiar with all products of this category on the market and I was never 100% satisfied with them. Something was always wrong, I had to work hard to put them in the mix and make them sound right. So at some point, I decided to use my sounds more: sampled, edited, processed what was on hand at the studio. Over time, I came up with an idea to develop everything as a full-fledged product, because if it works for me, it can work for someone else. In addition, within the product, we managed to realize a number of unique and unprecedented features such as a built-in full-fledged sampler, allowing everyone to create and share their own instruments. All this along with moderate prices, probably, allowed PD to knock out a niche on the market and become competitive.

How long did it take to implement the project? How has its library been filled — did you involve professional drummers to work? And who, besides you, has been taken part in Perfect Drums development?

Alex: It may be said took about 5-6 years from the germs of the idea to the final implementation, but this will not be entirely true. Today I’m convinced that, one way or another, I moved forward to this all my conscious life, honing skills and adjusting the vector of my professional activity. A lot of our musicians, drummers, and engineers took part in the work on the library, and I'm infinitely grateful to all of them. As for the software part of the development, a huge credit goes to Thomas, an experienced programmer from Germany, the runner of Intelligent Sound & Music, who believed in the product and took up the development even without advance payment and fees, because the budget of the whole project was miserable at that time.

I’ve heard you learned to code to implement this project. What else have you had to learn while working on the plugin?

Alex: Yes, as I said, because of very limited budget, almost everything had to be done myself – from interface design and animation to video editing, website development, encryption algorithms, etc., not to mention the legal difficulties of opening a company and debugging monetization system, which was done abroad. However, now I'm convinced that this is the way it should be if you want to get a high-quality result. Maximum involvement and personal control.

For the sake of Perfect Drums, you also had to close your recording studio. I suppose you invested a lot of efforts and money (buying equipment and plugins, building a client base, etc.) in Blacklight Recording Studio, were you sorry to part with it?

Alex: That's right. At the first stages of work on PD it became clear that many things would being sacrificed, because combining everything together became physically impossible. So, yes, among other things, it was necessary to freeze studio activity. But I knew that the experience and skills acquired over the years of work in the studio will always remain with me, so I wasn’t very upset. In general, I believe that the losses and risks are the first thing that you should be ready for on the way to something bigger. And the more bigger it is, the more you have to sacrifice.

Besides Blacklight Recording Studio, you were also involved in Semargl, as a guitarist, music co-writer, and sound engineer. In the beginning, the band played black metal, then black'n'roll aka "Satanic pop metal", then nu-metal and even dance-pop, and now you, Alex, are writing electronic music. How come? How has your creative activity so dramatically changed in 13 years (since "Attack on God" release)?

Alex: I like to try something new in everything. I can't even wear one hairdo for more than a year ;) And I'm glad that the guys from Semargl are also open to experiments, this is a development. To be honest, I do not understand how people can do the same for decades, it's boring. And in the end, as statistics show, such experiments only are benefited for the band.

Returning to the topic of Perfect Drums... How do you feel about synthetic drums in music?

Alex: I believe that sampled drums are, in one way or another, just a vital element in modern production. It’s archaic to perceive this as a "fake" nowadays, even in more live and dynamic musical styles.

How should VST drums be used to avoid so much criticized "dead" and false sound in a mix? Are there any recommendations on this matter?

Alex: If you need to get a more live sound — you should pay more attention to the balance of recorded live overhead and room mics in relation to the sampled elements you use, which in this case can be close microphones of the kick, snare, and toms. In general, speaking about live drums, the most important thing, in my opinion, (besides the actual drummer skills, of course) is the ambiance, room. The material recorded in a "dead" small dampened room will lead to a much more lifeless sound than a properly crafted MIDI track paired with quality and correctly recorded drum samples.

Not so long ago we've discussed with the producers of Alestorm, Aborted, Electric Wizard, Ghost, My Dying Bride, Powerwolf, and Sunn O))) the main mistakes of home production. And what the most common mistakes of beginner and inexperienced producers could you name?

Alex: The most common mistakes are probably artifacts of incorrect mastering, which in turn is often associated with wrong gain staging when signal levels within the processing chain are incorrectly set and many elements go into clipping. As a result, the track is squashed, flattened, lifeless, and simply unpleasant to the ear. Also, a frequent cause of problems is inadequate or improper control — it’s impossible to achieve a quality result, working only in headphones or monitors for $300. Such mistakes can bury any even the most correct mix. Also, today many people overuse such trendy devices as saturators, enhancers, stereo wideners, maximizers, etc., forgetting that the best records were made without them. Of course, it’s always great to have some new tools to experiment with, but you should be careful with them.

Name the album with the best production.

Alex: Actually, it's hard to single out one work. I'm constantly listening to something new and impressive. Probably, the most influenced for me, were the works of such producers as Chris Lord-Alge, Andy Sneap, Jens Bogren. These names are in themselves a sign of quality.

What other plugins do you use?

Alex: Recently I’ve begun to notice that I use fewer tools and plugins in my work. Most often in my projects you can see things like: FabFilter, Slate Digital, Softube, Waves, Vengeance Sound, Sonnox, Brainworx. Also, I’m very impressed with Aroma, the new development of the previously mentioned Thomas, who has worked on PD. It’s a terrific device.

Starting your own project almost alone is not an easy job, and more harder thing is to implement it successfully. What has motivated you, inspired and gave strength to work on your own product?

Alex: The best assistant in all endeavors, in my opinion, is always to have a one hundred percent confidence in success and no second of doubt. And inspiration will never leave you, if you are doing something that brings you pleasure. This is probably the main rule.

What are your plans for the future? Are you going to release something new?

Alex: There are a lot of plans. We are expanding our team, received several interesting proposals and contracts to enter the Asian market. Work on PD2 has already begun, and for this year, several more significant additions are planned within the current version, taking into account the wishes of users. In addition, in the near future, the line of plugins, of course, will be supplemented with new perfect tools, so sign up for our newsletter so you will not miss anything! Good luck!