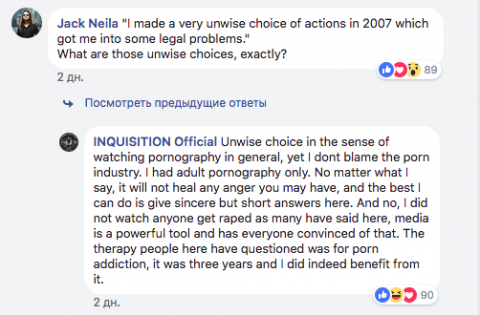 "Season of Mist are no longer working with Inquisition. There will be no further statement."

The probable cause of this decision the Internet users call a pornographic scandal associated with Inquisition's frontman, guitarist and vocalist Jason "Dagon" Weirbach. According to MetalSucks, in 2009 Weirbach was found guilty of child pornography-related charges. In proof of their words, the website posted scans of official documents from the Superior Court of Washington for Snohomish County, according to which the police found that Weirbach uploaded sexually explicit photos of children on Photobucket in 2006; later he was identified by his IP address. The police reports says that Weirbach tried to destroy evidence by deleting more than 2,000 images and video files from his computer, including pornographies with 2-year old, 9-year-old, and 13-year-old kids.

"Consequently, Weirbach’s computer was subpoenaed, and he was ordered to turn in the machine. According to the report, investigators found that “efforts had been made to sanitize/clean out” as many as 2,000 files after Detective Kowalchyk had left his home. Some of these files were recoverable, and proved to be photos of Weirbach and his wife, Inquisition, and more child pornography, involving both young girls and boys".

The article also alleges that Jason pleaded guilty, but the musician himself soon published a refutation:

"To all fans, supporters and close ones, I would like to clarify some horrific misinformation generated by the webzine Metalsucks of a personal matter of mine in 2007: First you must take into account, everything Metalsucks published is taken from court documents that state charges and accusations rather than what was proven or admitted in 2007. Second, I never plead guilty to the charges and the original charges were dropped after the courts examined all evidence. I am not a sex offender, and I was absolutely innocent of all charges. The plea bargain was something the prosecutor insisted on and for the defense was the best option to end a lengthy legal process. Also, the background check webpage circulating is not entirely correct, it is definitely not showing what the Police background check would show you.

With my fullest respect to you, please read my statement Metalsucks had told me they would publish:

The police report suggested I had deleted and obstructed evidence which I deny to have done, however the obstruction charge was still part of the plea deal as was the other charge mentioned in this article. That second charge is related to viewing pornography in a public area, and again was taken as part of the plea deal. To be clear, I have no sex crimes, this did not involve any other person other than myself and I have moved forward since 2009 while having complied with all aspects of the law.

I wish to remain focused on my music and my absolute dedication to the art of Black Metal. Despite any personal views and judgements the followers and supporters of our music may have, I am a somewhat private person and have never cared for destructive sensationalism and keeping what I feel is private, private.

I hope my level of transparency is understood and I thank you, as always for having been so supportive of Inquisition. With much respect to you, Dagon"

Responding to the comment of the user, who asked, "I made a very unwise choice of actions in 2007 which got me into some legal problems." What are those unwise choices, exactly?", Inquisition said as follows: 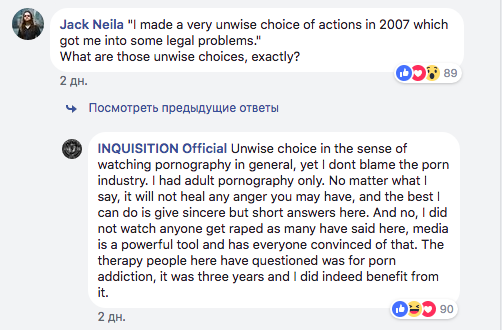 Later Inquisition reported that the band was "dropped from the Satyricon tour" in the US, but intended to continue its activities:

"Inquisition will continue; in the mean time we respect everones position and will allow time to control the chaos over its own horizons into its own order".