Dio's hologram to go on tour this year

The hologram of the vocalist Ronnie James Dio, debuted at the Wacken Open Air 2016 festival, goes on tour in 2017. It’s reported on Ultimate Guitar with reference to the interview with Jeff Pezzuti, the CEO of the company Eyellusion.

"For the tour he's going to have different looks. [At the Wacken show] he was somewhere around '88, the 'Dream Evil' era. For this next tour we're going to be somewhere later than that for certain songs and maybe earlier than that for other songs."

"The tour will be an over-the-top mind-blowing experience. We are going to have both live singers with Ripper Owens and Oni Logan as part of the show as well as Ronnie appearing throughout the show at different parts, some duets."

"Ronnie will be involved in each show from probably six to seven song a night that he will be singing on. Some of the ones we can expect are 'We Rock', 'Holy Diver' and 'Rainbow in the Dark.'"

In honor of the 20-year anniversary of the album "Something Wild", the Finnish metallers Children Of Bodom will go on the European tour, during which they will play a classic set-list. Within a month, the band will give concerts in the UK and Central Europe. All tour dates can be found below: 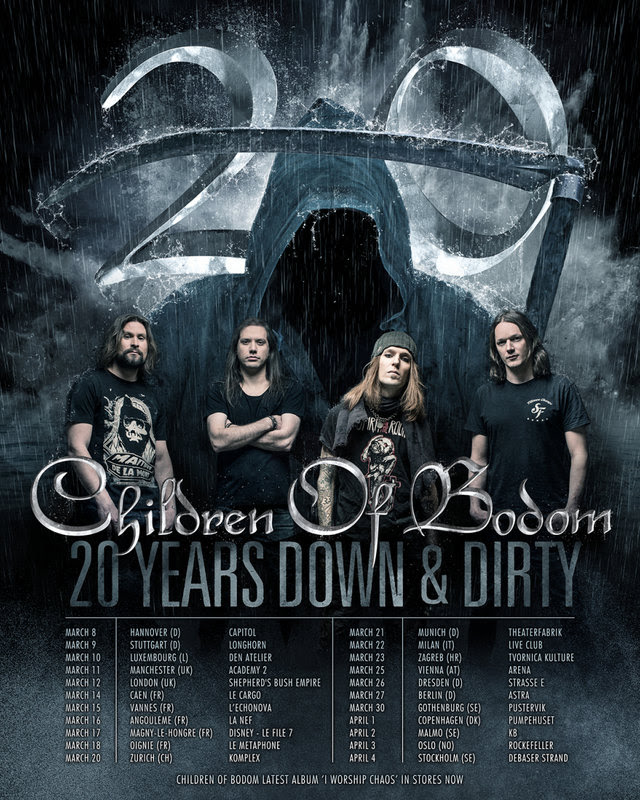 On the eve of their own festival Eluveitie & Friends, held in Switzerland on January 6 and 7, the folk metallers Eluveitie announced the updated lineup.

The musicians also reported that soon they will go to the studio to work on a new album:

"We cannot wait to enter the studios soon and finish "Evocation II". And right afterwards we'll be back with full force to rock the summer festival stages. Cheers & sláinte."

Follow the link to read the interview with Eluveitie’s leader about "Evocation II" release, frequent line-up changes and more.

The guitarist and one of the founders of the British band Black Sabbath Tony Iommi released a song "How Good It Is", written for Birmingham Cathedral. The new composition features Iommi playing the acoustic and the lyrics, inspired by Psalm 133.

On January 13th, Accept are to present the new live DVD "Restless And Live", which will include the entire show that the band played at Bang Your Head!!! Festival in 2015 and two live CDs with different recordings from their most recent European tour. In honor of the upcoming release, the musicians have shared the live video "Fast As A Shark".