The heavy metal pioneers Black Sabbath played the final show of their farewell tour "The End" on February 4, 2017. The performance, which took place in the musicians’ hometown, Birmingham, can be seen in the band’s upcoming concert film "The End Of The End".

"To bring it all back home after all these years was pretty special. It was so hard to say goodbye to the fans, who've been incredibly loyal to us through the years. We never dreamed in the early days that we'd be here 49 years later doing our last show on our home turf."

A special version of the film entitled "Black Sabbath: The End Of The End" will be shown on September 28, 2017, at more than 1,500 cinemas around the world. In addition to the concert itself, the movie will also include footage from the backstage, filmed by director Dick Carruthers ("Led Zeppelin: Celebration Day", "Imagine Dragons: Smoke + Mirrors Live"). "The End, Live In Birmingham" will be released in various formats later this year.

Information about tickets and sessions is available on the band's website at www.blacksabbathfilmtickets.com. If your city is not listed on the website, you can leave a request in the "Demand It" section for its official distributor Trafalgar Releasing.

The band's setlist for the gig was as follows: 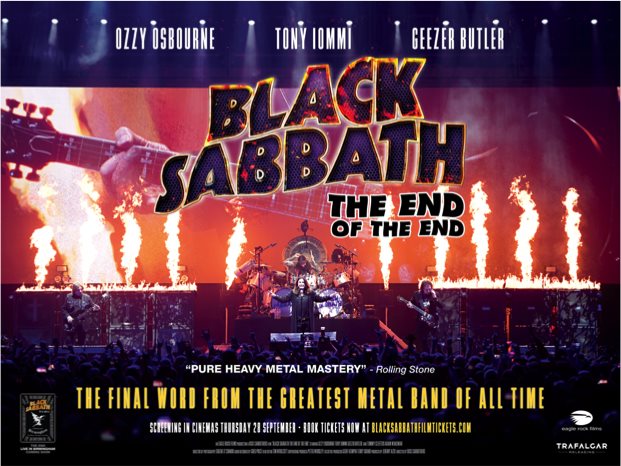