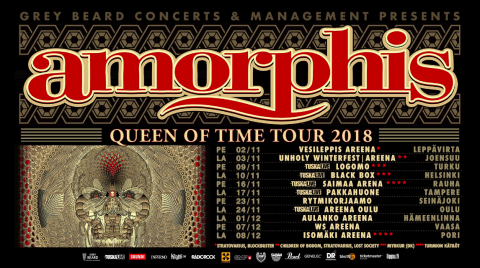 The Finnish metallers Amorphis have presented a new video for the song "Amongst Stars", featuring the singer Anneke van Giersbergen (The Gathering, Agua de Annique).

"'Amongst Stars' turned out as one of the most solid songs on the album. The song itself was not the easiest one to work with. We tried a lot of different variations during the pre-production and finally Jens‘ co-producer friend Per Aldeheim came up with these great vocal lines and idea for an duetto. We have been privileged to work with Anneke before so it was pretty clear to ask her to help us out with the song. As everyone knows her voice is more than stunning and she is surrounded by incredibly positive aura. As a result we have a really beautiful and catchy duetto where both singers do unbelievable work. We are extremely happy that Anneke was available during the time of our recordings and it was great to get her to the video as well. Lucky us."

"When Amorphis asked me to participate in a song for their new album, I immediately said yes without having to listen to it first because I knew it would be good. But when they sent it to me to start working on it and I was totally blown away! It‘s such a powerful and melodic song, I am proud to be part of it. The video for this song is equally epic. The guys of Amorphis look and sound fantastic and I am truly happy to ride with them on this journey towards their new album."

The song "Amongst Stars" appeared on Amorphis’ latest album "Queen Of Time" which came out on May 18 via Nuclear Blast Records.

In late April, the band released a video "Wrong Direction", the plot of which unfolds in the snow-capped mountains.