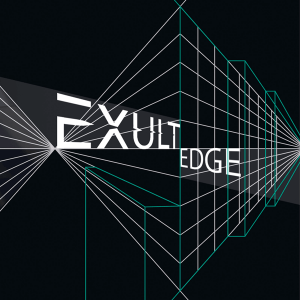 "Edge' is the first album by this polish project, but it is formed by experienced musicians who had previously experimented with various types of metal like doom-, death- and black metal but are more concerned with progressive and energetic sounds now. The linked forces in Exult are the Lyashkov brothers and two hired colleagues.

The concept of progressive metal is in most cases too much and too quickly used in categorizing bands, but it certainly does apply here. We are dealing here with an exciting combination of metal in a variety of styles, with many elements of experimental, even avant-garde music.

You can hear that band leader Dmitry Lyashkov sis trongly under the influence of Voivod from the late eighties and early nineties, when the Canadians surprised metal with their different compositions and vocal melodies. Other influences are the Germans of Mekong Delta, who also specialize in an unconventional approach to the metal song structures. You understand, it's not easy music we are talking about here. Broken rhythms and changes in time signature are in abundance, often enriched with ambient sounds and light electronics."