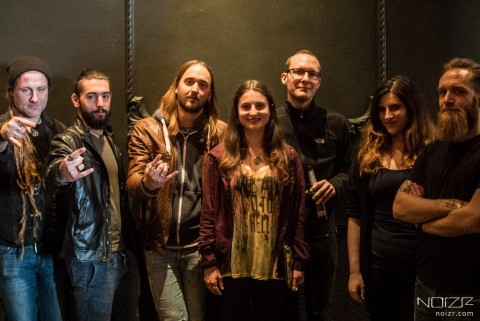 Eluveitie is the Swiss metal band whose style is described as "Celtic folk metal mixed with melodic death metal". In their creativity the musicians are actively using folk musical instruments and writing some of the lyrics in the extinct ancient language Gaulish. Shortly before the concert in Kyiv, we talked to Christian 'Chrigel' Glanzmann, Eluveitie’s founder, composer and lyrics author.

First of all, I would like to congratulate you on your latest album "Origins" success and not less successful tour in support of it. How is it going?

Chrigel: Thank you. You know, overall look very good. There have been quite a lot hiccups like when a line-up changes tour in a tour. We had a tour with Epica, but then after the third show they were forced to cancel the whole tour. There were a lot of problems, but besides that it’s actually been very, very good.

In addition to music and lyrics, you also worked on "Origins" front cover. Why did you decide to create it by yourself and not to invite an artist as usual?

Chrigel: Actually, I did all the artworks for all our albums. There were only the front covers of "Slania", "Everything Remains as It Never Was" and "Evocation I — The Arcane Dominion" I did in cooperation with someone else, but the other covers I did for myself. I’m working, doing graphic... So when I can do it, why I search for someone else?

You are the main author of music and lyrics in Eluveitie. Is the situation the same with video clips? Are you the key source of ideas for the band’s videos as well?

Chrigel: For some of the videos. But the last couple of clips we shot worked together with production companies. We just gave them like a basic idea of what we’re in the sense like, "Ok, we want to shoot in forest or in the mountains…", and just let them do it, create what they think is good. Of course, before we shot the clip they presented the riders to us and we said, "Yeah, this is cool, this is too different" or something. But basically we let them do what they think is suitable.

Last September, you announced the beginning of work on "Evocation II" (the follow-up to acoustic album "Evocation I: The Arcane Dominion", 2009). Can you find any time for working on a new material now during the tour? Do you have any results or ideas?

Chrigel: I can not really work on a music, like I can not compose songs or something on a tour. But I’m gathering a lot of ideas during tours and I’m working on a concept — all that stuff. So, yeah, the concept is finished and it will be like "Evocation I", it will be completely in the Gaulish language, early Celtic language. And the first track "Granus" of the album, you guys, will hear tonight [Chrigel means Eluveitie’s show on April 20 in Kyiv — Noizr Zine].

When should the fans expect the album release?

Chrigel: There is no release date, not even a plan for the production. But we have the idea to go to studio this year. Maybe, in summer or autumn. So, it might be released at the end of this year or early next year. Something like that.

Some musicians claim that using folk elements in their works it’s a method to support some historical culture from extinction. Do you share this point of view?

Chrigel: Honestly, I do not think about it too much. That might be something about, I mean, I don’t think that like due to what we’re doing, we’re a kind of preserving music or something like that. Of course, if no one plays bagpipes anymore, it’ll kind of extinct and fall into oblivion. So, I think, it’s a natural thing if people will play bagpipes, for instance, bagpipes music won’t be forgotten. I think, it’s just evident.

In particular, how did you discover for yourself the Celtic culture?

Chrigel: I think, I discovered it when I was in a kindergarten or in a grade school or something like that. Growing up in Switzerland, it’s just like a part of the culture and as soon as you go to school, you learn the history of your own country and you hear the stories about Celts. I just kind of grew up with these things.

Eluveitie has pretty a lot of line-up changes. Over your band’s history, it was something about 20 musicians. Some bands have problems with such changes because they identify their band with a family. And how Eluveitie gets through this process?

Chrigel: How to say, for us it’s also like that. For me personally, the band is like family and this is actually the case in a very actual way, because most of the time of our lives we’re spending together, because we’re on tour like up to 7 months a year and if we’re not on a tour we’re probably in studio, so actually the biggest part of our lives we’re spending, I’m spending with the band, not with the family or anyone else, but with the band. So, yes, the band is kind of my family. In my opinion, line-up changes is never something easy, it’s always like a challenge and it’s something difficult to deal with. It’s just happening, you know. It’s something normal and, I think, it’s pure math: like more people you have in line-up, there are more chances you have to actually run through line-up changes. But most of line-up changes we had in the first couple of years and basically it was just a matter of time, because when I formed the band it was clear and I made it clear that Eluveitie is about to work hard to move forward as fast as possible and as far as possible, it’s with that kind of music. And every year it has been more of everything: more shows, more tours, more than everything. So from time to time, every year every member had to ask him or herself, "Ok, can I still do that?", because back then we all had our regular jobs next to the band and we all reached a point when we had to quit our jobs, because we were touring so much. From time to time people had to ask themselves, "Can I still do it? Can I or want I do it and waste so much time?" And some people just chose, "Ok, now it’s getting to much from me and I still want to keep my job" or "I still want to do this and this" and so they decided to leave. That’s actually the reason for most of line-up changes we had back in the day.

I heard that in 2014 Eluveitie had a democratic voting due to which Patrick Kistler had to leave the band.

Chrigel: Yeah. We do have democratic votes about everything. But that was one of the cases where not the time was a question, but it just became difficult between some members and atmosphere wasn’t very good. So, yeah, one day like majority of the band said, "Ok, we need to talk about it and let’s have a vote". And majority of the band voted to part ways with him. Unfortunately, in my opinion. I was not one of them voting [smiles].

In 2014, you won the Swiss Music Award for "Best Live Act National". I saw the video and photos from this award and it looked really amazing, with a huge audience. Can we say that in Switzerland, where you come from, metal music has a special status, it is popular and receives a real support?

Chrigel: No, absolutely not. We’re working on that. We’re working on getting metal music on a bigger level. In Switzerland metal music is completely out of the picture and, I think, we’re actually the first Swiss metal band (maybe, Celtic Frost a little bit back in the day, but not very much) who reached some kind of a mainstream level in Switzerland. Usually, the Swiss media they don’t write about metal music, maybe, about Metallica or something like that, but nothing else. Metal is not a topic in Switzerland, it’s not like in Norway.

But when you won the award after that there were some publications in media or something like that?

Chrigel: Yeah, like I was saying. A couple of years we had this kind of mainstream standard in Switzerland, like big news papers, TV stations, radios reporting about us and stuff like that. But that actually a very new development, even today if they write something about metal music, they write about us, but in general metal music is not a topic in Switzerland. And for the government... I remember when I had to quit my job due to touring I was asking for official support from the government, for instance, if you’re like an architect who starting like a self-employee, he’s getting this support, but for us we didn’t get anything because the profession of a musician officially doesn’t exist in Switzerland. You can play in orchestra, there is kind of a base where you can work, but if it’s something like us it’s not accepted as an official job. So we didn’t get any support [smiles]. So, yeah, Switzerland is not a good country for metal music.

While our working on the material, Eluveitie reported that three band’s members decided to quit: the drummer Merlin Sutter (on the right side on the photo), singer and musician Anna Murphy (center) and guitarist Ivo Henzi (the third from the right). 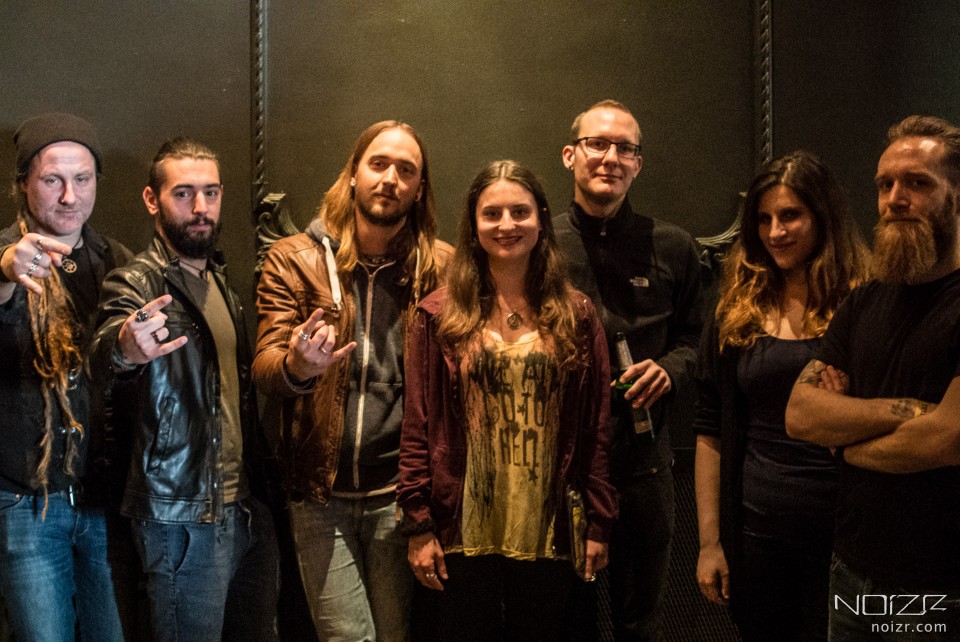