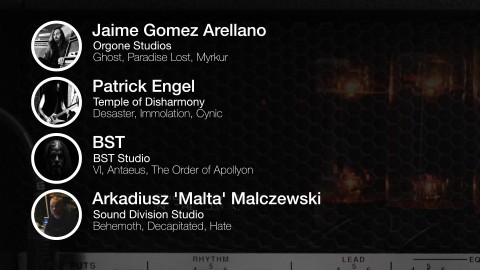 Welcome back to Inside the Producers' Studio. In this series, top producers from across extreme metal will share their knowledge and wisdom about recording and production. We’ve hand-picked some of the best and most interesting producers; some from large studios others from more niche circles, whatever their situation, you’ll be sure to pick up tips and get an insight into the minds that are shaping metal in the current era.

This second article is focused on how different producers prepare for recordings before they get the band in the studio. The first article about Studio set-up of "Inside the Producers' Studio" series can be found here. 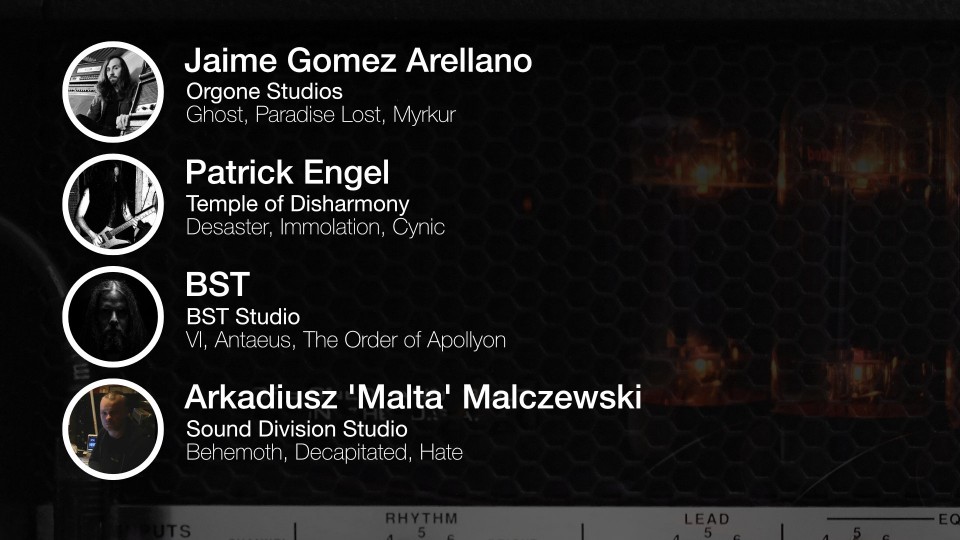 Patrick Engel is the owner of Temple of Disharmony, in his 20+ years of producing he was worked with bands like Teitanblood, Cynic, Desaster, Immolation, and Possessed to name a small selection! As well as his prolific studio work he has also played guitar with Teutonic death metallers Hatespawn. Contact: http://www.templeofdisharmony.com/

Despite having achieved considerable fame with bands like Balrog, Aosoth, The Order of Apollyon and Aborted, BST (Sébastien Tuvi) has also been responsible for the production and mixing on cult black metal records from groups like VI, Antaeus, and Hell Militia. Contact: https://www.facebook.com/bststudio616/

Arkadiusz 'Malta' Malczewski is based at Sound Division Studio in Poland. Constantly working on Behemoth's records, and doing live sound during the band’s latest tour in support of "I Loved You at Your Darkest", Malta has also produced albums from Decapitated, Hate, and Thunderbolt. Contact: https://www.facebook.com/sounddivisionofficial/

Before a band starts tracking do you have any prerequisites of them before recording?

Jaime Gomez Arellano: Yes. I like to see the band playing live or going to a rehearsal to see how people play, not just as a unit, but each individual. If I spot any "problems" in their playing, I tell them to try and correct them before we enter the studio. This could be drummers not hitting the drums right, a guitarist playing too hard and going sharp with every strum etc. I also love doing lots of pre-production with bands, so that all the songs and parts are settled and working by the time we enter the studio.

Patrick Engel: At first, the band should know their own songs and also should be able to play their instruments… very important thing is to check the sound/tuning of the drums before we start working on the sound we want to record. Also, the selection of bass and guitar amps is very important for a nice sound. In the end, I want to achieve that every band sounds on an album as they sound live or in their rehearsal room. I don't like to re-amp the guitars with my own sounds, because every artist should have his own character soundwise.

BST: I usually ask that they send me their previous recording, or at least some rehearsal recording of sorts. I'll quickly check if there's anything they have to fix BEFORE starting recording, so I don't have to fix it in post/editing. It might be something about how their amps and tones are set up or flaws in their instrumental technique. Most of the time, I strongly advise the bands I work with to record to a click track, after practicing to it an appropriate amount of time. It may sound obvious, but I ask the bands to rehearse properly, so they're ready in the studio and don't have to rehearse the parts then, struggle, and relearn things.

Arkadiusz Malczewski: When I meet the band before the recording, we discuss all technical aspects: if they want to use their own drums or the studio set, the same applies to guitar and bass amps. We talk about the types of drum skins. They have to prepare a click guitar track before recording drums. I often ask for some rough recording from their recent rehearsal.

What is your preferred order to record instruments in? Does it ever change?

Jaime Gomez Arellano: It depends on the band. Most of the time for a rock or metal band I tend to record drums first, guitars second, bass third and vocals last. Even when I record in "blocks" (as described above), when I’m recording the drums, I like having the whole band playing with the drummer to capture more of the band’s "vibe". I also like recording bands live. It really depends, I don’t always work the same way, I like every record I produce to be different and give every band a sound that suits them, rather than give all my clients "my sound".

Patrick Engel: Sure, there is no standard formula. Most bands prefer to record the drums whilst a working track was played by the guitar player which will be removed later. There are also some bands who prefer to record drums and first guitar live… that is fine because I don't like to record with a click track and the drummer doesn't have to count all the breaks on his sticks. It is also very important for the own dynamics and style a band has… I want to capture them as they sound. I did also productions with bands who played all together. It always depends on the skills and the idea of the artists… I am able to record all ways.

BST: Drums first, most importantly. Bass or guitars next, according to how comfortable that makes things for the musicians. It's not unusual to have a bass player wanting to record to a mix of drums and final guitars, especially in riff-based metal bands. Vocals next, and then anything additional, keys, samples... Of course, it can change with bands whose members have strong job commitments, and it happened before that I had to record the second guitar player's part last, for instance.

Arkadiusz Malczewski: I usually start with the drums. After editing the drum tracks, we move to guitars and bass. Whenever the main guitar parts are ready, I try to start tracking vocals in short sessions day by day or every two/three days. It all depends on the availability of musicians and their schedules.

Recorded, mixed, and mastered by Temple Of Disharmony

Biggest annoyance when recording in the studio?

Patrick Engel: A bass drum or snare head is crushing before the last song… it is very annoying to get it right in tune with the rest. It also sucks when a guitar or bass amp breaks during the sessions.

BST: Musicians who don't know what they want, and end up messing with the time schedule because of wanting to try ten different ideas for each part, or redoing things without having a specific result in mind. It can get frustrating, especially when you're on a tight schedule, and limited budget.

Arkadiusz Malczewski: I think what annoys the most is low-quality instruments that have not been made ready for such a demanding process recording is. When you add unprepared musicians, it becomes a complete nightmare. Throw in arrogance, artist’s ego and the best thing one can do is leave the room and go home. But usually, it is not that bad.

All instruments recording (except drums), mix, and mastering by BST Studio

What habit or approach (if any) have you changed compared to earlier things that you recorded?

Jaime Gomez Arellano: I think I’m a bit more patient than used to be :) I also feel like I’ve improved and learned a lot over the years. I make an effort to learn new techniques and tricks as much as I can. You can always be better and improve your work.

Patrick Engel: When I started working on Rape Of Harmonies Studio in the middle of the 90s, we did some recordings with a click track, created bass drums with MIDI and so on… We did a lot of metalcore productions and most of the musicians were too bad to get it right… When I started my own thing, I decided to work more in a rock'n'roll way, the same kind as in the 70s or 80s. The only difference is that I use a PC to record the tracks, not a reel-to-reel machine. I am also not into that copy-and-paste mode. If a part comes four times in a song, I want the band to play that part four times. Music has to sound like made by human hands, not by machines.

BST: Making more backups, better file arrangement by name so not to misplace anything... Also, I used to sometimes start mixing one track before the others were fully tracked yet. Not a good idea, it messes up with the whole work dynamics. Nowadays I divide each production clearly into phases: Pre-production, Tracking, Editing/Re-amping, Mixing, Pre-mastering…

Arkadiusz Malczewski: Oh, a lot changed in that field. Today, when I think how much more I could have done 15 years ago using the same old gear but the experience I have today I can do nothing but smile. I continue to learn to expand my knowledge, skills and be up to date with the latest technology and trends just like anyone who wants to stay active in this profession. The world keeps changing and technology is developing at an amazing pace.

As a producer how do you view your role? Just as the person who records and mixes or by helping an artist discover, change and alter their music?

Jaime Gomez Arellano: I like getting involved in the songwriting and arrangements, but I’m never too bossy about it. For me, it’s a collaboration between myself and the artist and my job is to help them convey their vision the best possible way.

Patrick Engel: No, as a multi-instrumentalist, I am always into the music itself, not the recording only. I have many ideas about additional guitars, vocals and stuff… and if I can improve something, I give my ideas to the band.

BST: My role is what my "clients" want it to be. If I'm working with people who have a very precise idea of what they want, and I think they're realistic about it, I'll follow whatever requirements they need. I'll help a band find their optimal overall tone, but never overstep, they have to need my advice.

Arkadiusz Malczewski: Whenever I work with experienced bands who have a solid vision of what they want to sound like I usually limit my role to little suggestions (though I am not always right) and a partner discussion to achieve the best possible result.

With younger bands, I usually try to have more input and suggestions because they often come in search of such expert knowledge and assistance. I try to be as helpful as possible at every stage from choosing the right amp, instrument lines, music arrangement to mix and master.