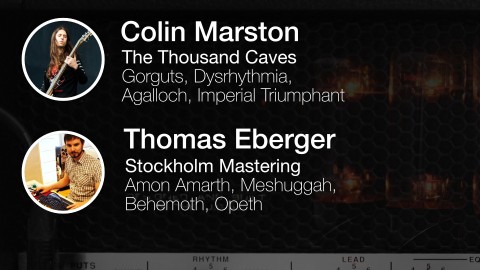 Welcome back to a new series for Noizr — Inside the Producers' Studio. In this series, top producers from across extreme metal will share their knowledge and wisdom about recording and production. We’ve hand-picked some of the best and most interesting producers; some from large studios others from more niche circles, whatever their situation, you’ll be sure to pick up tips and get an insight into the minds that are shaping metal in the current era.

The 9th article in our series is focused on how different producers approach the mastering process. 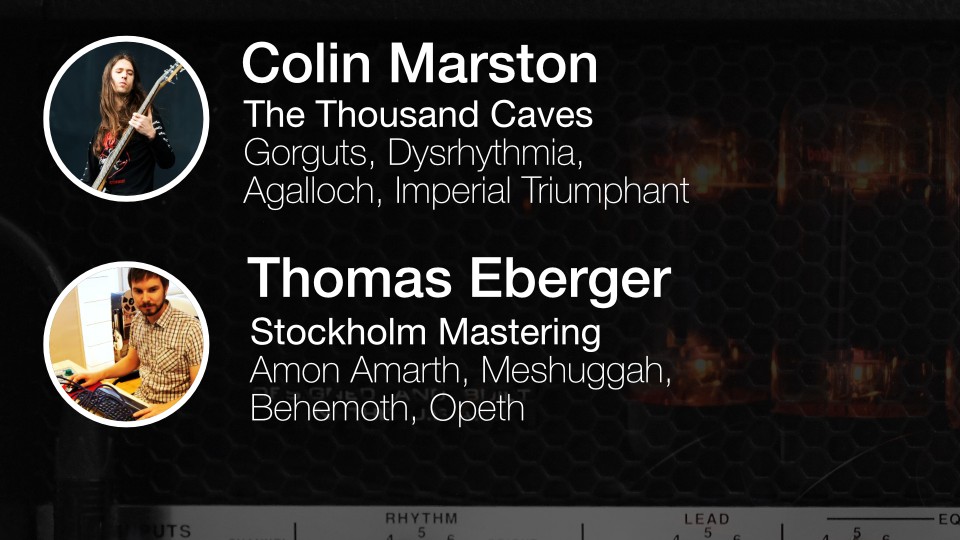 Colin Marston is a prolific musician, playing in numerous bands such as Krallice, Gorguts and Dysrhythmia. His credits for production with his studio The Thousand Caves is staggering, having worked with bands like Agalloch, Altar of Plagues, The Howling Wind, Deiphago, Imperial Triumphant, Liturgy, Panopticon and Mitochondrion. Contact: thethousandcaves.com

Thomas Eberger is the co-founder of Stockholm Mastering, along with Sofia von Hage they have helped master hundreds of records. Thomas’ metal mastering credits include bands like Amon Amarth, Sarke, Meshuggah, Behemoth, and Opeth. Contact: stockholmmastering.se

How do you approach the mastering process initially?

Colin Marston: The first thing I do is listen to the unmastered mixes. if I've also recorded and mixed the project, then I've been listening to it for days and usually have a pretty good idea of what mastering processing might help or hurt the mixes. If I'm only mastering (not also recording and/or mixing) I usually listen through multiple times to familiarize myself with the sound and musical content before doing anything. Often if it's the first time I've worked with a band, I'll also familiarize myself with their older records. Once I feel like I have an abstract idea of how the mixes could be improved, I'll start spacing the tracks in the sequence of the album and deciding on the transitions between songs (if the band hasn't already told me specifically how they want things paced). During this phase, I'll also adjust the relative general levels from song to song if certain mixes are awkwardly quieter or louder than others. Then I move on to processing the mixes in terms of eq, dynamics, and stereo characteristics.

Thomas Eberger: If it's an album, I place all the songs in order in a project. Then I listen briefly to all the songs and roughly set the relative levels between the songs if needed, either by ear or by a LUFS-script. This is just to get everything in the ballpark, the levels will be tweaked later anyway. I usually begin working on a track that grabs my attention in any way. Since I'm all digital, I can dive in anywhere, and jump around between the songs and work in a non-linear fashion. Then I work with every song until everything sounds great. If I lose focus for some reason, I might open another project and work on that for a while, or begin to edit head and tails, set pauses and enter metadata. There's always something to do that matches my current enthusiasm and energy level. I only do unattended mastering much for this reason, to be able to always do my best work whatever it is that I'm doing at the moment.

Which is the best mastering software that you have used?

Colin Marston: Back when I first started mastering, I used a program specifically designed for that. But I quickly realized that using a normal DAW provides the engineer with much more flexibility (especially in terms of laying out the flow of a release). I've gone from Digital Performer to Pro Tools, and now have been using Logic for roughly the past 9 years. These days most of the processing I use for mixing and mastering comes from UAD2 plugins, with some PSP plugins.

Thomas Eberger: We use Reaper from Cockos Inc for all processing, editing and some of the exports. It's a fantastic DAW and we have tons of custom scripts and macros to help with our workflow.

As for processing, we have plugins from DMG Audio, TDR Labs, Brainworks, Waves etc. We also use some plugins that we have developed ourselves, for example a compressor that I almost always use when compression is needed, and also a monitor controller for easy level matched A/B listening.

For restoration we use iZotope RX, and for exports we have various programs from Sonoris, Hofa etc.

What effect, if any, has the 'loudness war' had on your mastering process?

Colin Marston: The biggest effect the loudness war has had on my process has been the amount of time I spend talking to bands about what "loudness" really is, and how it's different from "dynamic range". I'm a strong advocate of never seeking a specific destination level for audio, or engaging in loudness comparisons between different records, so when musicians say things like, "The mastering sounds perfect! We want it to sound this good but also appear louder when compared to other records at the same listening volume," I feel obligated to take as much time and effort as is necessary to help them understand how those desires are mutually exclusive, and, more importantly, how the idea of loudness is relative and fundamentally out of their control. the audience decides how loud to listen no matter what the format is: no band, recording engineer, or mastering engineer can make you listen at any particular volume. So my philosophy is, you might as well disregard that and just focus on making the audio sound as good as it can, and have a dynamic relationship that suits the music contained on the recording.

Being right in the middle of the "loud mastering" thing for so long has really made me think long and deeply about it, wondering why people seem to hell-bent on sacrificing quality for the sake of something totally out of their control to begin with. The conclusion I've come to, is that most people have trouble understanding the difference between apparent loudness and dynamic range (which isn't surprising since those concepts are not as straightforward as is convenient), but worse than that, they have a fear of appearing weak or not being taken seriously which breeds a competitive spirit that I find no place for in the arts. Maybe that competitive desire fits into sports or business, but isn't music and art in general sacred because it's fundamentally self-expression, unbounded by the quantifiable?

Thomas Eberger: Nowadays the loudness war is less of a problem than it used to be. Mostly because there is less demand from clients for loud masters, and also because the current tools are better at letting more music through despite silly levels.

Is all of your mastering done digitally?

Thomas Eberger: Yes, since 3-4 years. Before that I used a hybrid approach with some processing in analog, and some in digital. For me, staying all digital simply sounds better, and I get better results.

How often do you use limiters on individual tracks or busses?

Colin Marston: I almost never using limiters to compress audio in any kind of noticeable way. When I master, I usually have a limiter at the end of the chain, but if it's kicking on, it might only be taking out a fraction of a dB very occasionally, and never during a moment of loud impact. I usually set the most impactful transient moment of the record to -.1dB and let all the quieter moments be quieter. If the limiter does engage, chances are it will be at a moment that doesn't sound like it should be louder anyway, so might as well contain the dynamics so that an inconsequential moment isn't actually the loudest part of the record. Once again, we're usually just talking about .2 db of reduction here and there.

Instead of limiting I much prefer tape saturation/simulation when I want very fast high ratio compression. When I track, I used to record onto 2" tape and then transfer the multitrack and mix in a DAW. now I use an emulator of the same 2" machine I used to have: the Studer A800 MKIII. So there's usually some amount of tape compression or the individual tracks of one of my mixes. Even though I hate amp simulators and find them to be no replacement for the real thing, I've come to really like the sound and flexibility of tape simulation for tracking, mixing and mastering (and special effects sometimes!).

Thomas Eberger: In the normal case, I work on stereo material, so there will be only one track/bus. When I receive stems, I usually just sum them to stereo and only make adjustments within the stems if absolutely needed. I have a clear policy regarding stems that the sum of the provided stems at unity gain should be the approved mix. Otherwise it will be another type of job, bridging mixing and mastering, which I occasionally might do as well.

What are the biggest mistakes you see more inexperienced producers (or even yourself in the past) make when mastering songs?

Colin Marston: Unfortunately, I think most of the mistakes are being made by the MORE experienced engineers. The obsession with loudness has completely ruined the mastering industry. Is that too harsh? I'm not convinced it is! In the past, I've had recording engineers, whose work I respect, ask for me to master one of their recordings for "competitive loudness" — someone who understands exactly what kind of sacrifice that might entail. I've also worked with and been horrified to notice mastering engineers who actively encourage bands to compare volume levels of their record to others.

As long as the people who actually understand this topic still encourage musicians to misunderstand it and allow their insecurities to guide them towards pointlessly unfortunate decisions, the industry will continue to be in a state of ruin.

The good news is that because so much music is being listened to through auto-leveling algorithms (YouTube, Spotify, iTunes soundcheck to name a few), more compressed masters are simply tuned down to seem about the same loudness as more dynamic masters. So most of the time these days "loud" masters don't even get to be loud in that split-second switch from one recording to another.

Thomas Eberger: I think one of the keys to both mastering and mixing, is to keep working until you and the rest of the people involved are 100% happy with the sound. Listen to your mix (or master) everywhere, get feedback from others, listen to other music, reference your stuff against other great stuff. Keep working until you get there, or at least until you know you won't get any further.

Also, make sure that you are focusing on the right things while you mix or master. Identify the 3-5 elements that are essential to the song and drives the song forward, and give them top priority. Try to find ways to make these essential elements sound great in the context of the mix. Often it's the lead vocal at the top of the list, then whatever instruments that make the song and groove happening around the vocals. These elements are what most listeners focus on, and they are crucial for making the listener feel connected to the music and performers.

What is your top tip for getting a master to sound the best it possibly can?

Colin Marston: Sometimes not making a change sounds better. I think it's important for mastering engineers to constantly ask themselves, "Am i really improving this, or just making it different?"

Thomas Eberger: The most effective way to make a recording sound like a demo is to bury the essential elements in the background or make them sound out of place. If, on the other hand, these elements are fronted and great sounding, then the mix will fall into place much easier. The mastering stage will then usually be about the final polish needed to take the mix from great to fantastic.