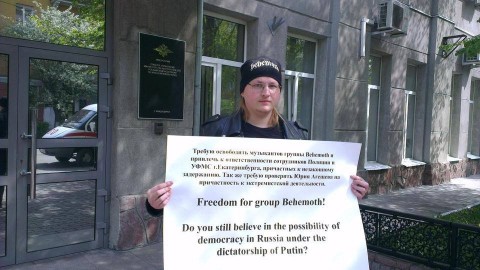 Polish black metal band Behemoth, who was due to give a show in 13 different cities, which were the part of Russian Satanist tour, faced many problems there.

For a long time before Behemoth arrived to Russia, the Union of Orthodox Brotherhoods ROC members began to agitate government and people to cancel the band's shows. We are reminding, that in Russia there is a law of protecting religious feelings, which is actively referenced by many orthodox people for canceling events that they don't like. After several activists's petitions Behemoth's fans started to create their own petitions to the authorities, but for supporting the shows.

But, despite the protests, Behemoth could safely started their tour on May 10 in St. Petersburg and continued it with the gigs in Murmansk and in Irkutsk, but then the performances in Tomsk, Khabarovsk, Vladivostok and Novosibirsk have been canceled. Before the show in Novosibirsk, there was an incident associated with unknown athletically built men, who blocked entrance to the club and pushed the visitors. In a result, those men started fighting with the metalheads.

Due to these situation, Nergal recorded a video message in Russian, explaining the purpose of the Behemoth's trip as the Russian fans' support and denying "any propaganda". Besides, the musician said that his band "is used in some political game".

The last straw in this confrontation happened on May 21. Before the show in "Teleclub", Yekaterinburg, the musicians were arrested by the Federal Migration Service. The reason for this was, according to the authorities, "the wrong visa". Details of the arrest became known through Nergal's post on Behemoth's Facebook page:

"We've been detained by the immigration services for "wrong visas". When I said that we wouldn't leave the club without a representative of the Polish Embassy, they started threatening to force us out. Finally, they took us to the building of FMS (Federal Migration Service) by bus, accompanied by about 10 people. We tried to contact the Polish Embassy in Yekaterinburg , but no one was answering the phone. Please copy this message and share wherever is possible. We may expect a multihour hearing. The concert is off for sure. The only thing we want is to get back to the hotel safely and then – to Poland. No matter how we try, but we can do nothing in this case."

After few hours of detention a new message was posted on Facebook page:

"News from Nergal: It seems, that we are arrested. Our phones were taken away. At 9 am will be court verdict and, perhaps, deportation".

According to znak.com, every one of the musicians was fined for 2,000 rubles and self deportation. The judge of Yekaterinburg October District Court, Katherine Green, added that the fine must be paid within 60 days and the band must leave the country "within a reasonable time which the law does not specify".

The judge explained that musicians had violated visa requirements, because they didn't obtain a humanitarian visa instead of a business visa. But, according to Blabbermouth.net, Nergal said that band was advised to issue a business visa at the Russian consulate in Warsaw. In addition, previously without any problems in Russia Justin Timberlake and Black Sabbath gave shows, also issued business visas, as told booking-director of Ekaterinburg's "Teleclub" Semen Halperin.

As regards the conditions of police camera, in which were Behemoth, they left much to be desired. In the short interview with the Russian journalists, Nergal told that walls were smeared with excrements, and musicians' requests for going to the toilet was denied for some reason, that's why they had to use bottles. After the court, the musicians went home to Poland.

It is worth noting that during Behemoth's arrest the fans didn't leave the musicians. They came to the court and, according to znak.com, brought a breakfast for the band. The fans created groups in social networks for the band's support campaigning, encouraging to buy merch at Behemoth's official site and post comments with apologies. Also, some Russians have announced their intentions to send petitions to the authorities and organized pickets against the Orthodox activists. 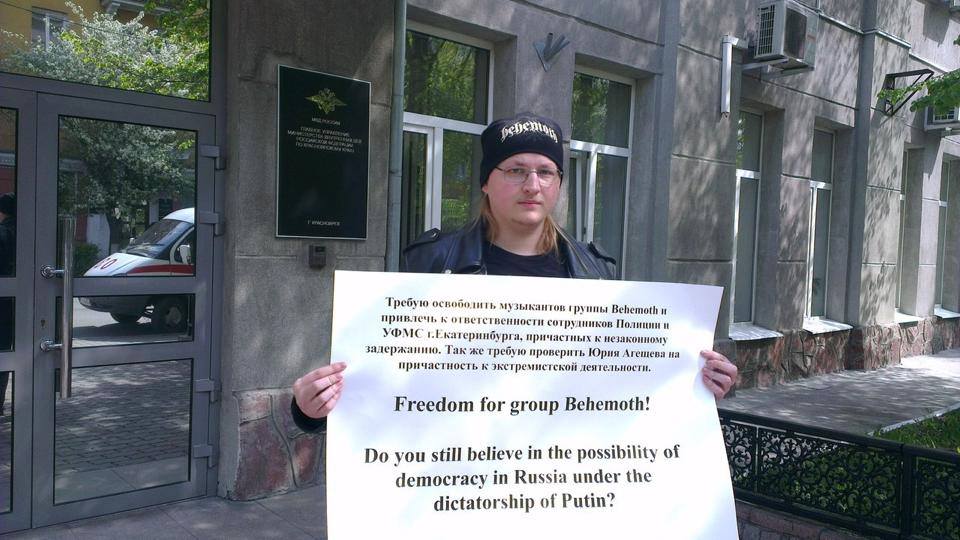