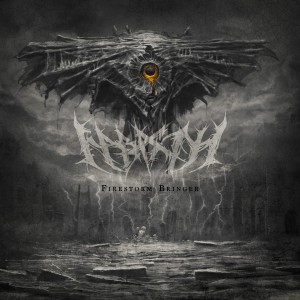 "The name chosen by the Ukraine-based black metal band Nabaath for their new EP could easily be an alternate name for the band: Firestorm Bringer. It’s as close to a sonic hurricane of hellfire as one could hope for — utterly ferocious, completely electrifying, and immediately addictive.

Firestorm Bringer is also an archetype of how the EP format can be used to supreme effectiveness. There are only two songs here, both of which are themselves compact, plus an outro track that both contrasts with and complements the flamethrowing ferocity of those two songs. The three tracks don’t feel like a scattering of stand-alone pieces thrown together for want of a better place to put them; instead, they make for a cohesive representation of a particular kind of power, and if the EP had been longer it might well have lost some of its impact. It’s over almost before you know it, but it may still leave you wide-eyed and slack-jawed (as it did me)."

"The two main tracks on the EP are the title song and “Corpses of All Religions”. Both are ripping, racing torrents made of furious, incendiary riffing and blindingly fast drum cannonades punctuated by skull-smashing percussive booms and incandescent cymbal crashes. They bring a level of viciousness that’s breathtaking, yet they display a dynamism in rhythm and pacing (and poisonous melodies) that make the music highly infectious."

"As for that outro track, torrential speed is no longer the objective, and yet it is still a fitting way to complete the EP — because even though the firestorm abates, the EP’s hellish atmosphere doesn’t dissipate. True to its name, “Voices of Hell” sets a cacophony of crazed voices against a haze of slow, repeating, abrading chords and bursts of clattering percussive tones. It’s grim, and convincingly inhuman.

Sometimes the best gifts come in small packages — and this EP is one of those. I’m very happy to join with a few other sites in helping to spread the word about it."