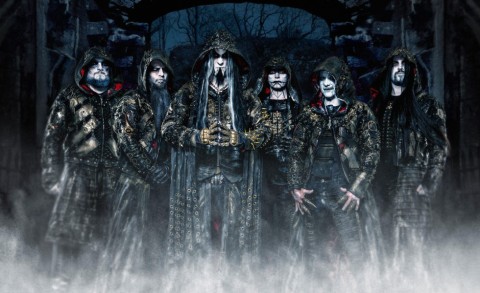 After a long departure Dimmu are back, having stated a desire to make an album that they’re thoroughly content with and not limited by the confines of the 'symphonic black metal' label.

For all of the ire and scorn Dimmu face for kowtowing to mainstream success and accessibility by the wider metal audience, I can’t really criticise them; Shagrath [the band’s frontman — Noizr] and co have been able to create an entity that is able to financially sustain them, which is the dream of most artists. They broke out of the underground and regardless of their creative output their success is something that is impressive.

Musically, Dimmu have never had much impact on me as a full entity, yet I think it’s unfair to say their music has always been poor, certainly in recent years their compositions have been lacking, yet there are songs like "Mourning Palace", "Blessings Upon The Throne Of Tyranny" and "Vredesbyrd" that are undeniably catchy and well-composed. Shagrath’s lot has the ability to write catchy, groovy melodies that despite not holding true to the values of most within black metal, within a broader context are sonically pleasing.

"Eonian" was billed as the album Dimmu really wanted to make after a long departure since their last offering — the limp and bland "Abrahadabra", imo. Much of the tropes of Dimmu are here in spades, lots of synths, orchestrated parts and an overabundance of choral vocals. What has been restrained and utilized effectively in previous records is now boundless and plenty, detracting from the core of the songs writing — ending up as more of as a crutch than a flourish to add an extra element to a well-written song.

The music falls into the murky soup of a genre that is 'extreme metal', too few hallmarks of any particular genre to be categorized into anything specific. Far too many of the songs try to cover a wide range of styles and yet the songs are at their strongest when they fall back on Dimmu’s natural inclinations of black metal.

Every song tries to be bombastic and epic but all too often ends up feeling like a mish-mash of ideas connecting one overtly symphonic/choral idea to another. There are a few passages that hark back to the strengths of Dimmu at their best, but they’re too far and few between to elevate the album.

The production is a double-edged sword to the album, on the one hand, it displays each and every element to the album perfectly, everything has space to breath and be heard, yet this clarity comes at the cost of feel to the album, the production is lifeless and sterile, the music feels like it was captured in a vacuum with each instrument capturing a single performance to later be assembled as opposed to a well-oiled machine where the band performs as a solid unit.

Ultimately I feel that Dimmu have tried too hard to create something grandiose, relying on too many cheap tricks to try and achieve this, whilst forgetting the most important part of epic music — the foundations of the songs are phenomenal to begin with — "Eonian" feels like the epitome of 'you can’t polish a turd, but you can roll it in glitter'.